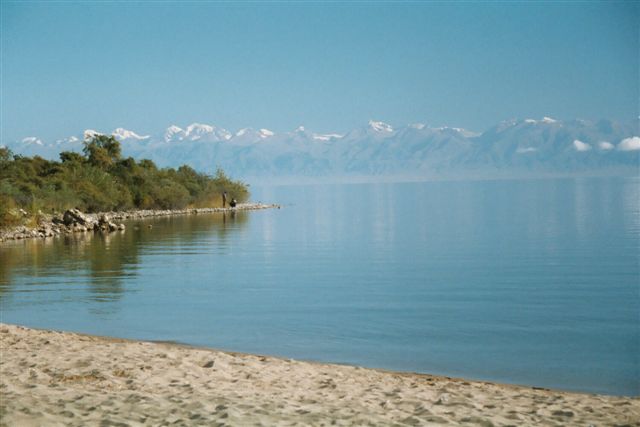 The process of mapping ancient Yersinia pestis (plague) strains along the central Asian mountain chain, or greater Himalayas continues. Up to now, most of the living ancient strains have been mapped in Tibet/western China and a few scattered other places (Cui et al, 2010).  Russian scholars have a released data on mapped ancient strains of Yersinia pestis from Kyrgyzstan, ancient Bactria, perhaps one of the most important sections of the Silk Road. Not only does this area link Tibet with Persian controlled areas, but Bactria also controlled the main routes to the Hindu Kush and, therefore, Pakistan/India. The 56 strains analyzed were collected by the Russian Anti-Plague Institute ‘Microbe’ in Kyrgyzstan over the last 50 years (Eroshenko et al, 2017).

The strains discovered in Kyrgyzstan include some of the ancient lineages that branch off the main stem of Yersinia pestis phylogenetic tree before the “big bang” and the Black Death pandemic. These strains are represented on the map and diagram below.  Several historians have suggested that Lake Issyk-Kul in Kyrgyzstan was an important area for understanding the origins of the Black Death (for example Schamiloglu, 2016a). Historians Phil Slavin, Monica Green and Uli Schamiloglu (2016a) are currently actively working on the second pandemic in this region. Unfortunately, these genetic results won’t offer them much help. This does not mean that this wasn’t an important area for the second pandemic. Many areas where it passed have no genetic traces left in modern Yersinia pestis foci.  No living immediate ancestor or descendent strains of the Black Death were found in Kyrgyzstan. The same can not be said for the most ancient pandemic, the Plague of Justinian.

The most interesting finding is the discovery of the 0.ANT5, that despite its name is situated between 0.ANT1 and 0.ANT2 on the phylogenetic tree. The main branches of the tree are named in order of discovery. When compared to previous genomes, it was found to be most closely related to the genomes found in sixth-century Bavaria from the Plague of Justinian. This is the first close relative of the first pandemic discovered. We need more sequenced genomes obtained from ancient DNA and modern foci from the Himalayas to the Caucasus mountains before we can say anything origins of strains. However, this is the best evidence so far that the Plague of Justinian strain originated in central Asia and the local history of the area during the sixth-century make it really interesting.

So, how did these enclaves survive for well over a thousand years?  Let’s take a closer look at the ecology and history of Late Antique Kyrgyzstan.

Lake Issyk-Kul, the nation’s most striking feature,  is one of the largest high mountain lakes in the world. Antique and Medieval descriptions of the lake remark on its fearful waves and monstrous fish, advising people not to venture onto the lake.

It really isn’t what most of us would expect from a high mountain lake. Fed by glacial melt, rivers, and springs with no natural outlet, it is extremely deep and hot springs bring in enough warmth to prevent freezing even in the coldest period of winter. Like other large lakes without an outlet, mineral salts have accumulated in the lake making it slightly salty. Arid and semi-arid regions throughout Central Asia have salty soil.  Humans can not drink its waters but there are salt tolerant plants on its shores.  Recent data from North Africa suggests that Yersinia pestis can endure for long periods in environments with salt springs or salty soil (Malek et al, 2016). Unfortunately, we do not know exactly where the salty soil is located in Kyrgyzstan or whether the halotolerance really is helpful to endurance. Looking at the salt content in the soil of reservoirs with ancient strains or long quiescent periods might be helpful.

The Bactrian camel is adapted to drink salty or brackish water and eat salt-tolerant plants. This should have made Lake Issyk-Kul a major point to refresh these camels, named for the Bactrian region that included Lake Issyk-Kul. These camels were the primary pack animal for the entire Silk Road and once ranged from the Gobi desert in China to the eastern Caspian Sea.

So we have an environment that creates ideal mountain enclaves, some with salty soil that is permissive to the endurance of old strains of plague (as seen in arid North Africa), and a pack animal that is susceptible to plague concentrated in a region that is an important branching point in the Silk Road. We also know that humans readily contract the plague by consuming infected camels (Arbaji et al, 2005; Leslie et al, 2011). The largest recent outbreak occurred in arid southwest Afghanistan.

To seek the early route of the Plague of Justinian, we have two regions — Pelusium in Egypt where it was first reported and the western Tian Shan mountains where the 0.ANT5 strain indicates that Justinianic strain likely at least passed through — to provide clues. Fortunately, we do have ready routes that link these two regions. The first-century Greco-Roman Periplus of Maris Erythraei lists an itinerary for trade from the ports of Roman Egypt down the African coast and across the sea to the many ports of India. It also lists the trade opportunities at each port so that we know where valuable goods were traded. The silk route between Alexandria Bucephalus to China brings goods from China, Tibet, and the steppe through the Hindu Kush and down to western Indian ports. The approximate area that the 0.ANT5 strain of Yersinia pestis was found in marked on the map below.  I have discussed this general route before and it has been argued for by historians before, but resources were (and still are) scarce (Schamiloglu 2016b; Harper 2017; Tsiamis, Poulakou-Rebelakou, & Petridou 2009).

These routes are generally called the Silk or Spice road, but much more was traded in routes the at crisscrossed India and Central Asia. Tibet was considered the ‘Land of Musk’, for it’s most valuable and prized export. The musk of Tibet was considered of higher quality than anywhere else including China (Akasoy & Yoeli-Tlalim, 2007).  Musk routes interlinked the ports and trading centers in the Indian subcontinent and west into Sassanid Persia. Other exotics including pepper, gemstones, and textiles were produced in the Indian sub-continent. The Indian ports probably had a wider variety of eastern trade goods than those that passed through the Persian control.

In the 530s to 540 when the plague outbreak would have begun, the Hephthalite  (or White Hun) Empire was in control of an area from the Tarim Basin north of Tibet through the Hindu Kush and down into the Indus valley.  The southern Hephthalites in the Hindu Kush and south were sometimes also called Huna. At its peak, the Hephthalite Empire included what is now Kyrgyzstan, Tajikistan, and parts of Kazakstan, Uzbekistan, Afghanistan, and Pakistan. The eastern Huns began their push into Central Asia around the time the western Huns were pushing into Europe.

For a while, the Eastern Huns had seized the vital crossroads of the Silk Road and became a heady stew of peoples and religions with exotic trade goods crisscrossing their land. The people of their realm practiced Zoroastrian, Hindu, Buddhist, Manichaeism, and Nestorian Christian customs, and they spoke an equally diverse set of languages. The White Huns themselves were primarily warriors, who made their living off the lands they conquered. In the West, Persia is usually thought of as the gatekeeper to the Silk Road, but in Justinian’s time, it was the Hephthalites who controlled access to most of the routes of the Silk Road.

At the battle of Herat in 484 CE, the Hephthalites defeated and killed the Sassanid king Peroz I and took the north-eastern quadrant of the Sassanid Empire allowing them to stretch the Hephthalite territory all the way to the Aral Sea, including possession of Samarkand.The plague will have been passing through Bactria and the Hindu Kush in the 530s-540 when it was securely in the possession of the Hephthalite (or Eastern Hun) empire. Their empire began to unravel after the battle of Bukhara in 557 AD. The former Persian areas passed to the Turks, who had been in alliance with the Persians, in 557. This alliance did not last; the Turks unsuccessfully sought an alliance with the Romans against the Persians by 568.

The Hunnic incursion into Central Asia, mostly made in the fifth-century, caused as much political disruption as when the Huns moved toward the Roman Empire. Coupled with the environmental and climate change that severely affected the semi-arid regions it is an attractive area to study the first plague pandemic.

Harper, Kyle (2017). The Fate of Rome: Climate, Disease and the End of the Empire. Princeton UP.

Schamiloglu, U. (2016b). The Plague in the Time of Justinian and Central Eurasian History: An Agenda for Research. In I. Zimonyi & O. Karatay (Eds.), Central Eurasia in the Middle Ages Studies in Honour of Peter B. Golden (pp. 293–311). Quaternary Science Reviews.