Smallpox is one of those diseases long believed to have an ancient pedigree, the suspected culprit of legendary epidemics. Yet, so far, smallpox hasn’t made a big impression in ancient DNA surveys. If it was truly endemic throughout the Old World before 1492, so much so that it pops up in the New World almost immediately after contact, it’s odd that it has not been more prominent in ancient DNA surveys. Be ready for a smallpox paradigm shift and reexamination of its reputed history.

In December, Ana Duggan, Maria Perdomo, and the McMaster Ancient DNA Centre team announced the first full ancient smallpox genome isolated from a mummified 17th-century child in Vilnius, Lithuania. Radiocarbon dates of the child place him or her in the mid 17th century (est. c. 1654) in the midst of dated smallpox epidemics from all over Europe.

Their finding was unexpected. They were not looking for smallpox at all; the child had no observable lesions. They were hoping to find JC polyomavirus, of particular interest to one of the co-authors, and so they first enriched the specimen for this virus (McKenna 2016). After detecting variola virus (VARV), smallpox, instead they then enriched for VARV to confirm the initial signal. 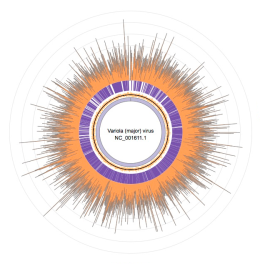 More than just confirming the signal, they were able to reconstruct the entire genome producing the entire sequence at an average depth of 18X. The surprising child had more revelations in his or her viral sequence. The sequence is ancestral to all existing reference strains. This is consistent with short stretches of aDNA amplified from 300-year-old frozen Siberian remains (Biagini et al, 2012). Unfortunately, the sequences from 2012 were not distinctive enough from the new Lithuanian sequence to give phylogicial resolution between them. Oddly, the frozen Siberian remains also lacked smallpox skin lesions with one showing signs of pulmonary hemorrhages.

Its ancestral position in the phylogeny suggests that a severe bottleneck occurred before c. 1654. As Duggan et al (2016) remark, vaccination would cause a very strong bottleneck, but this occurs after 1654 and there is new diversity among the descendent reference specimens producing two major clades. Yet to be determined is the evolutionary effect of extensive variolation practices in the early modern period. In contrast to vaccination, variolation is a form of intentional smallpox transmission that sometimes went horribly wrong.

Evolution continues unabated. The molecular clock is consistent among the 20th-century specimens and the latest aDNA from the Lithuanian child. The two clades of smallpox collected from 20th-century specimens diverged from each other sometime around the mid-17th century after vaccination began. Interestingly, the less virulent Variola minor strain is not predicted to have emerged from Variola major clade P-II until the mid-19th century.

It’s not entirely surprising that smallpox, a highly transmissive human-only virus, has a relatively recent last common ancestor; other viruses like measles do as well. Measles last common ancestor is probably in the early 20th century (Furuse, Suzuki & Oshitani, 2010). The dominance of the 1918 influenza strain in recent influenza phylogeny is another example; incomplete because influenza swaps genes with influenza viruses that are circulating primarily in birds, but also in swine and earlier in equines (Taubenberger & Morens, 2005). Improved transmission strains are likely to out-compete strains with a lower transmission rate if they achieve a global spread. For some viruses, though not necessarily all, improved transmissibility and virulence go hand in hand. So, in the end, the relatively recent last common ancestor says more about its global transmissibility than anything else.

The antiquity of the virus needs two components to estimate. The molecular clock must be steady, and it is so far (though this could change with more ancient specimens), and a near relative ‘out group’, related strains outside the Variola clade (a branch of the larger genetic tree). One potential problem here is that as transmissibility improves the clock may speed up. The speed of the clock is determined by the reproduction rate. The relatively steady clock back to this 17th-century specimen suggests that the transmission rate was pretty steady — after the evolutionary/transmission leap that swept aside other Variola strains. The inactivation of several orthopoxvirus genes in smallpox that are functional in vaccinia (used in smallpox vaccines), camelpox, and taterapox  (the ‘out groups’ used) may suggest that one or more of these genes had been protective. When the genes were inactivated, smallpox probably became a much more dangerous virus to humans.

Historical epidemiology suggests that there was once more variation in the virulence of smallpox epidemics.  Securely identifying smallpox epidemics in the historical record is much harder than is generally assumed, and it is harder yet to make a claim for a significant demographic impact prior to the Renaissance (Carmichael & Silverman, 1987). This is the problem with theories that smallpox was the cause of the second-century Antonine plague and then failed to cause an epidemic with a major demographic effect for many centuries. I find this very hard to believe. Additionally, the infamous smallpox epidemics in the New World are now also be reevaluated in ways that diminish smallpox’s toll and add in a wide variety of contributing factors to produce a colonization syndemic. This has most recently been summarized in essays collected in Beyond Germs: Native Depopulation in North America (2015).

One other observation from these studies: All ancient smallpox DNA to date has been extracted from mummy tissue, not a tooth or bone. This may point toward one of the limitations of ancient DNA pathogen surveys that currently use primarily teeth. Since neither mummy had visible smallpox lesions, smallpox should be considered a possibility in any mummy.