I’ve been reading some history of medicine and anthropology on re-emerging infectious disease lately. The label, ‘re-emerging’ infectious disease, is a response to the mid-20th century attitudes when eradication was the goal for many, if not most, pathogens.  The eradication of smallpox will stand out all the more awesome because we now know it will be a rarity. Polio is still so close, and yet so far. These pathogens are ‘re-emerging’ because they were thought to be beat, conquered or at the very least managed. It was an age of confidence, some might say over confidence. 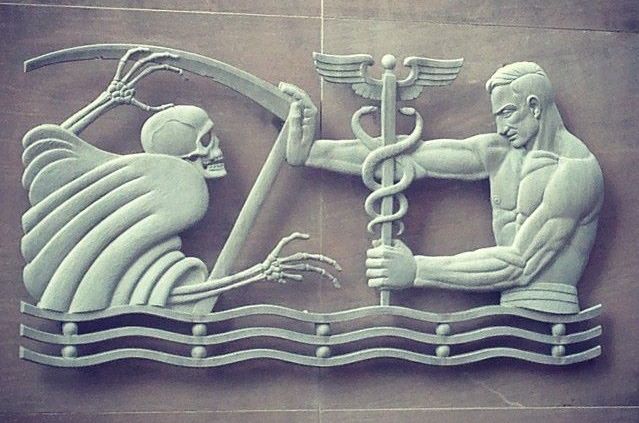 This picture is floating around the internet. I don’t know where it originally came from or where this sculpture is located. It just seems to typify that era so well. The buff man of medicine holding back death itself. I guess its supposed to portray strength and confidence. This era is foreign enough to me that it’s just off-putting, such bravado and over-confidence. I doubt that few of us who became professionals in the era of HIV, much less SARS or ebola or the ‘re-emergence’ of old foes like pandemic influenza,  cholera and plague can understand the level of confidence that prevailed in the mid-20th century.

Does anyone know more about this sculpture or where it came from? It seems somehow familiar to something I seen in St. Louis, but not the figure of death. It looks like the 1950s or 1960s to me?

Update: Thanks to the wonder of twitter, Heather Battles found it for me. It’s at the Fulton County Health Services, 99 Jesse Hill, Jr. Drive, SE Atlanta, GA 303034 google map . She found out the artist’s name, Julian Hoke Harris.