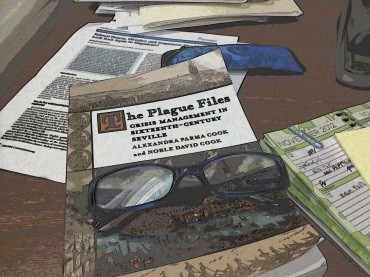 Those interested in history, crisis management, public health, and political science; written for a general audience.

The Plague Files is an intensive history of the daily challenges and crises dealt with by the royal governor and city council of Seville from 1579 to 1582.  As its title implies, this book is about crisis management and it stays true to this focus. Seville was faced with two very different pandemics, influenza and plague, within the same year compounded by food shortages, economic pressures, response funding difficulties, response fatigue, and the potential of civil unrest. If you ever wondered what it would be like for plague and an influenza pandemic to go (sequentially) head to head in the same population, Seville in 1579-1580 is your ideal test population.  The challenges and limitations of both quarantine and a cordon sanitaire are highlighted throughout the book.

I was impressed by their case investigation and surveillance system.Workers were contracted and paid based on their service, so detailed reports were filed to justify their pay from the plague commission. Using these reports, the authors were able to trace the detailed steps of case investigators as they tracked exposed people and textiles that they viewed as contagious. Dispatched surveillance officers also had to file detailed reports of their efforts and findings to draw their pay. The Count of Villar, the royal governor, handed out penalties including jail time for officials and others who were deemed negligent in their duties.

It was fascinating to see how their concepts of contagion played into their public health response. Textiles were the gravest concern for controlling plague contagion inside the city walls. The trail of dead owners of some clothing or bedding seems to justify their concern. Yet, there is no evidence of personal protective equipment/behavior or concern over grain storage. On the other hand, the city was on the verge of starvation much of the time so they couldn’t be very choosy about grain shipment or storage. Physicians were advisers to the Plague Council but not central to the decision-making process. Most were hired to work for the duration of the plague, often one per hospital or outlying village. The Plague Council was primarily concerned with controlling movements of people, and  providing and paying for the poor and destitute who they knew were kindling for an explosive outbreak. Diagnosis was the physicians most useful duty to the plague council. Plague diagnoses were complicated by concurrent outbreaks of influenza, typhus, other ‘common fevers’ (possibly malaria), and malnutrition. There is no doubt that the plague with all its classic symptoms was the primary pathogen.

One of my take home lessons from The Plague Files is how long and relentless a plague outbreak could be. Response fatigue was a critical problem for everyone. People just get tired of the restrictions and become conditioned to the steadiness of death. Unlike the short, sharp influenza mortality, plague deaths often trickled in at less than ten per week for months punctuated by spikes of death.

This microhistory draws almost entirely  from a cache of primary source documents in Seville’s Municipal Archive. Surprisingly, quotes from these documents are very short. The focus on Seville is so intense context is often lacking.

The science is anecdotal and kept at the level of sixteenth century understanding. They don’t apply modern understanding of plague or influenza.  Medical treatment is discussed vaguely; few specific treatments are detailed. For example, the council paid for apothecaries to stock and provide plague medicines but the authors didn’t discuss what they stocked or if they had difficulty obtaining medicines. It appears that there was no standard treatment or medication used in the region. They don’t make an effort to accumulate data or do any standard epidemiological analysis. By the end of the book I was craving some data. The volume of anecdotal evidence does provide plenty of evidence that diagnosis was not very secure for many individuals complicating data classification.  Historical epidemiologists will have to cope with other concurrent diseases, significant for plague outbreaks that last months to over a year. Ironically in the case of Seville, I suspect a standard epidemiological chart of total deaths vs time would have highlighted the difference between influenza and plague.

It has a full bibliography but minimal footnotes, mostly to primary sources. I suspect that it would be fairly difficult to look for more information based on their footnotes and access to the primary sources.  They appear to have made minimal use of the secondary sources, or at least there are very minimal footnotes to them. It does have a glossary for Spanish terms; all quotes are translated. The illustrations were okay. It could have used a few more local maps fit into the text where appropriate.

I recommend this book primarily for biosecurity and crisis managers. Its usefulness to the sciences and humanities is primarily for anecdotal information.